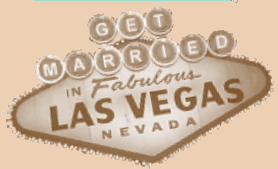 Las Vegas is the wedding capital of the world, with so many chapels and its no-hassle legal process.  Mix that with 24 hour alcohol availability, good-looking strangers lounging around swimming pools, and people who might suddenly have large sums of money in their hand at any given moment, and you can see why this is such a romantic place.   Go to clarkcountynv.gov and you’ll see that weddings are near the top of the County’s home page.  In 2016, 81,325 marriage licenses were issued by the Clark County Clerk’s Marriage License Bureau, more than any other county.  Download the County’s handy reference, How to Get Married in Las Vegas, which is great (that’s where we got the image–kudos to our County Clerk!)

I had a quickie Las Vegas wedding myself and it was very romantic.  We were having dinner one Friday night and I said, “Hey, want to go downtown in the morning and get married?”  Yes, the Clark County Marriage Bureau is open on Saturday.  I won’t say it was cheap though.  Ten bucks for the license, and another $100 for the actual festivities at the Marriage Bureau (as I recall they wanted cash).  Oh, and I think we had to pay for parking too, since it was downtown.  And we had lunch at a Strip hotel afterwards, another fifty bucks.  But if you prorate that over the years since, I guess it wasn’t so bad.

So you see, I can’t recommend any chapel from personal experience.  Below we have listed a few that we think are notable because of what they offer and from the word around town.

Chapel of the Flowers was voted the LV Review Journal’s Best Wedding Chapel and noted by Bride’s Magazine for having the “prettiest decor of any free-standing wedding chapel in Las Vegas.”   They offer several chapels and venues, for example the Victorian, Glass Gardens and the Gazebo, and will even do your ceremony at the Grand Canyon or on the High Roller observation wheel.   They have an amazing gamut of choices for your ceremony, and can handle absolutely everything, from cake, music, makeup, limo, flowers (of course), reception, you name it.   We include them on our list because of the variety and choices they offer, and on the quality of reviews they have received from industry organizations and clients.

This one is pretty cool because you can get married in the Doo Wop Diner, or in the Elvis and Priscilla chapel (with Graceland backdrop).  Even better is their themed weddings, with selections like Vampire, Gothic, Intergalactic, Thriller, Western, Liberace, Woodstock…and these are just a few.  Think of it, getting married dressed as Jean-Luc Picard with “Captain Quirk” officiating will give you lots more stories to tell than your usual run-of-the-mill church affair.

Graceland is a cute little chapel that’s been here practically forever.  We like this one because they have a contract with Elvis to sing for their weddings and walk the bride down the aisle.  This is proof that Elvis is still alive, no matter what else you might hear.  And for a guy in his 80’s he still has all those moves.   Many celebrities have bee married here, including Aaron Neville, Billy Ray Cyrus, Jon Bon Jovi, Jay Leno, and Robert Trump (the president’s younger brother).
www.gracelandchapel.com, www.elvisweddings.com

Little Church of the West

The original little Las Vegas wedding chapel, built in 1942 and moved at least twice, most recently when the old Hacienda was demolished.  This chapel is full of Las Vegas history.  It was originally located at the Last Frontier, which was built by R. E. Griffith, a Texan who was an early movie theater mogul who then set his sights on the emerging resort business in Las Vegas.  The chapel is a cedar wood building that looks like a traditional Scandinavian stave church, and has hosted many celebrity weddings from the 1940’s on, including Judy Garland, Mickey Rooney, Dudley Moore, Cindy Crawford, and Richard Gere.
www.littlechurchlv.com

I would be amiss in not including our favorite, and the one I have personal experience with.  Conveniently located downtown about 3 blocks south of the Fremont Street Experience, although I guess you still have to pay for parking, or else there is a bus line that stops nearby.  There is usually a waiting line, so you can always ask the next couple to be your witnesses.   The County has an online marriage pre-application available, so you can fill in your marriage license application before you arrive at the office.  The fees have gone up, it’s $152 as of this writing for license plus civil ceremony.  No fuss, no muss, and there’s a good Mexican restaurant nearby for lunch afterward.  I had no complaints.